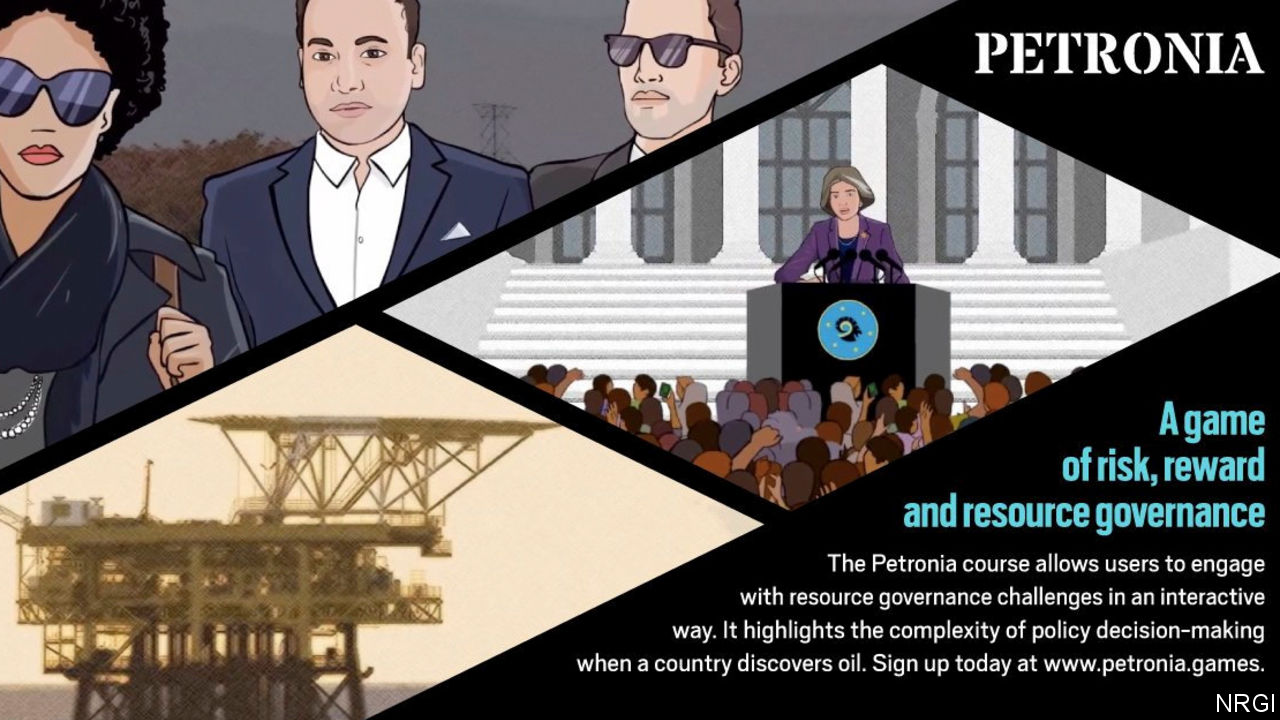 ALAIN LILLE is not pleased. His wildcat oil firm spent a fortune looking for oil in Petronia, a former colony known for cashmere wool, long before anyone else was willing to take the risk. After sealing a deal with the long-ruling government, he was poised to reap the rewards. But in last year’s election, a new president came to power, promising a better deal for the people. Mr Lille fears she will reopen negotiations, further delaying any profits for the company or revenues for the country. She has invited four foreign “experts”, who have never set foot in the country before, to advise her. As he shares these concerns at a drinks reception at Hôtel Capitale, Mr Lille notices one of these foreign advisers sidling up to listen in.

Mr Lille does not exist. Neither does the country, Petronia. They appear instead in a new online game created by the Natural Resource Governance Institute (NRGI), a think-tank based in New York and London that seeks to improve the management of oil, gas and mineral wealth in developing countries. As a player, you take on the role of that pesky foreign adviser eavesdropping on Mr Lille. As well as the drinks reception, your adventures will take you to the presidential palace, the capital city’s cafés and markets, and the coastal district of Neftala, where the oil was discovered.

In its training courses NRGI has long experimented with role-playing. It hopes that the game, which took £130,000 ($170,000) and three years to produce, will reach a wider audience, including activists in countries that see a lot of themselves in Petronia. A former employee, Jed Miller, has described it as “grand theft petro”.

In truth, it is more educative than addictive. The freedom that players enjoy is necessarily constrained, says Katarina Kuai of NRGI. Even perverse decisions will not take you too far from the main plotline. The game does little to disguise the priorities of its makers. (In Petronia, even the taxi drivers talk about the need for transparent data on revenues.)

The game nonetheless conveys the dilemmas faced by countries like Petronia. Should the government lock in a stream of revenues through royalties, or take a riskier equity stake? Should it seek to build up local staff and expertise, or tap foreign firms and outside know-how? Saving revenues for the future will help stabilise the economy, but could also frustrate voters and leave the president’s successor with money to squander.

Even experts will learn something. And they will enjoy the inside jokes scattered throughout the game. One of the foreign advisers is tediously eager to promote his new book (“Big Bang Growth”). Another is modelled on Nicola Woodroffe, a lawyer at the NRGI. And Mr Lille, the shady French oil man, is the spitting image of Robert Pitman, the upstanding head of the institute’s work on transparent contracts.

NRGI is not alone in venturing into this kind of “serious gaming”. Petronia’s launch event featured Elizabeth Newbury of the Wilson Centre, who has helped create games out of American government policy. In “The Fiscal Ship”, for example, players try to cut America’s public debt while meeting national goals they can choose (or copy from President Donald Trump). Ms Kuai thinks that films like “Avatar” and “Black Panther” show that the politics of natural resources has broad cultural resonance. “We wanted to catch this wave,” she says.