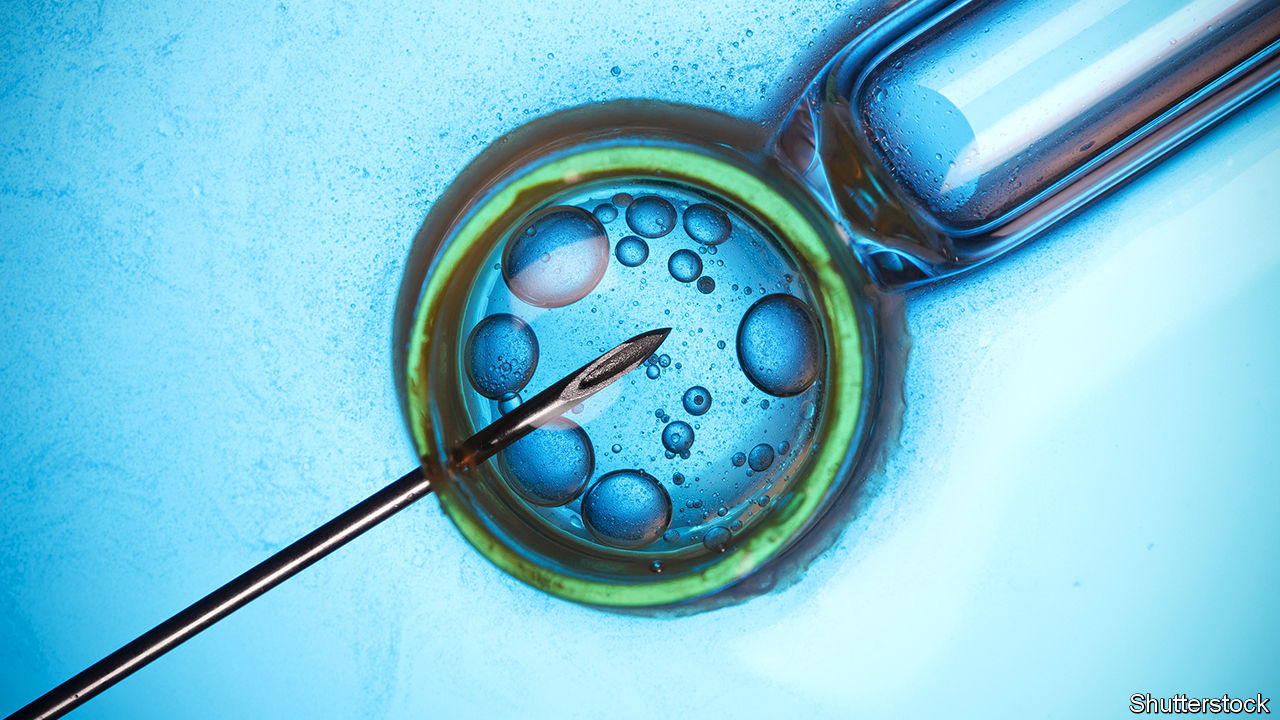 IN 2016, 71,000 babies were born in America after in vitro fertilisation (IVF), triple the number two decades earlier and 1.8% of all births. The share of births that are by IVF varies around the world, rising as high as 4% in Denmark, Israel and Spain. One consistent trend, however, is growth. Fertility technology is steadily improving and women are choosing to delay child-bearing, meaning more couples need medical help to conceive.

For many would-be parents the main impediment to conception is now not science but finance. Data for 2017 gathered by ICMART, an international non-profit organisation, show vast variation in prices. A single IVF attempt costs around $3,000 in Japan, $4,000 in Cameroon and up to $10,000 in Europe. In America it costs more. The countries with the highest IVF birth rates are those where taxpayers pay for treatment. (There are a few exceptions, such as Croatia, where medical tourism pushes the IVF birth rate up.)

A three-year-old startup, Carrot, is taking a novel approach to helping with the costs. It was born out of the experience of its co-founder and CEO, Tammy Sun, who was startled to realise that the health-insurance plan offered by the technology firm where she worked would offer no support for her own efforts at conception. After $35,000 yielded a dozen fertilised eggs, one of which will, she hopes, one day make her a mother, she decided to think through the funding of fertility treatment from first principles. What was needed, she concluded, was not only help paying for it but also certainty upfront about how much money she would get.

Such transparency is unusual for American health insurance, which requires a muddle of out-of-pocket payments, if it offers coverage at all. Patients do not know how much they will get back from insurers until much later. It is also different from public health-care systems, which often restrict coverage in other ways. In Britain, for example, eligibility rules vary from place to place and waiting-lists are long. Patients rarely know they will not be covered until they have asked and been turned down.

Carrot’s answer is to act as an intermediary for fertility-related medical-service providers to American companies and their foreign operations in 22 countries; Poland and Singapore are next on its list. Carrot collects and shares information on costs and results, which companies use to set up benefits, and employees to shop around. It charges firms an administrative fee, and they offer their employees a fixed sum, ranging from $2,000 to $100,000, averaging $10,000, that can be used for IVF and related services. (In most countries, corporate benefits can be claimed by any employee regardless of sex, sexual orientation or marital status, as long as they are used for eligible services; the exceptions are where that would break national law, such as a French ban on IVF for same-sex couples and a Japanese ban on IVF for unmarried couples.)

Since users can be certain of their benefits, they know exactly how much treatment they can afford. The same applies to firms: they know how much they will be on the hook for. Carrot’s clear cap on payments means that would-be parents may run out of money before they conceive. But at least it is transparent about it—unlike many alternative systems.

Biden Continues Tradition Of Taking Credit For A Good…